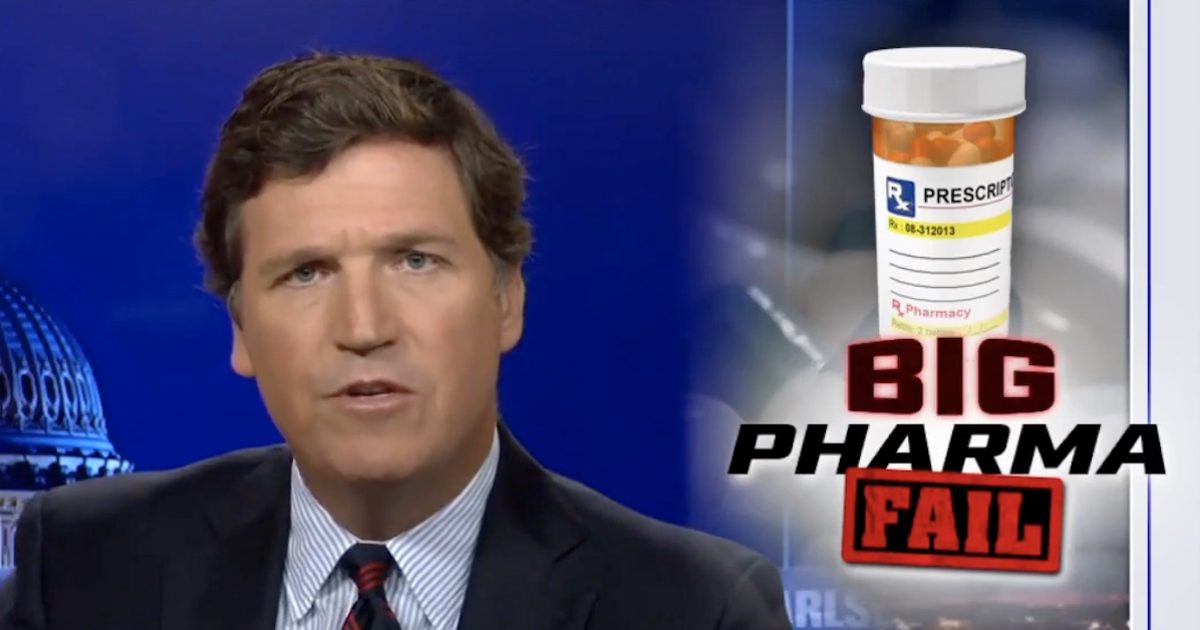 Following the release of a study that discredited the use of antidepressant drugs, Fox News host Tucker Carlson slammed Big Pharma and Democrats for peddling pseudoscience in the name of profits as he lamented, “drugs are not the answer to every human problem.”

Kicking off Monday’s edition of “Tucker Carlson Tonight,” the host delved into the consistent track record that pharmaceutical companies have in pushing products that lead to detrimental outcomes, and often don’t even address the problem they were marketed for. This heightened scrutiny appeared triggered by a recent study released in the journal Molecular Psychiatry that contended low levels of serotonin were not related to depression.

Carlson had previously linked selective serotonin reuptake inhibitors (SSRIs) such as Zoloft, Luvox, and Prozac to mass shooters listing off specific offenders like Eric Harris, Kip Kinkel, Jeff Weise, Steven Kazmierczak, and James Holmes who were all prescribed one or another of these antidepressant drugs. Though he acknowledged there was no definitive connection, he had contended SSRI prescriptions rose 3000 percent between 1991 and 2018, and yet suicide jumped by 35 percent and so it appears the real problems facing these young men were ignored.

“Now drug makers admit that their products may be part of the reason for the increase in suicide,” Carlson said Monday. “The makers of Prozac, for example, can see that young people who take that drug have an increased risk of suicide compared to those who took a placebo. Think about that for a second. A drug that’s supposed to make you less sad may make it more likely that you will kill yourself. How is that allowed?”

On the SSRI study, he went on to note the lead author, Joanna Moncrieff’s, findings when she said, “I think we can safely say, after a vast amount of research conducted over several decades, there is no convincing evidence that depression is caused by serotonin abnormalities, particularly by lover levels or reduced activity of serotonin.”

“What?” the host asked. “That was the whole premise of the drug, which virtually the entire American population was taking on their doctor’s advice and by the way, the drug companies made billions off those drugs.”

Not everyone had allowed business as usual to carry on as this chemical dependence was forged and Carlson drew attention to a 2005 interview between Tom Cruise and “The Today Show” host Matt Lauer that recently went viral where the actor had cautioned the need to do the homework on these pills.

“All it does is mask the problem and if you understand the history of it, it masks the problem. That’s what it does. That’s all it does. You’re not getting to the reason why. There is no such thing as a chemical imbalance. I’m saying that drugs aren’t the answer – that these drugs are very dangerous. They’re mind-altering antipsychotic drugs and there are ways of doing it without that so that we don’t end up in a ‘Brave New World,'” Cruise added with a reference to the book by Aldous Huxley.

However, Carlson’s concerns weren’t limited to just SSRIs. Airing clips of the blasé attitude that “medical experts” like Drs. Anthony Fauci and Deborah Birx now hold to serious issues Americans faced throughout the pandemic such as the impact vaccines had on menstruation and their overall efficacy.

“Really, Deborah Birx?” he asked, “But somehow you forgot to mention that as people were being fired from their jobs for not taking this on the premise that if they took it, they would never be infected.

Meanwhile, now-Vice President Kamala Harris had said in 2019 that pharmaceutical executives were “nothing more than some high-level dope dealers” who “should be held accountable” and decried the idea of taking any treatment recommended by then-President Donald Trump only to, as Carlson put it, “suddenly [sound] like the chief marketing officer at Pfizer.”

The aggressive promotion of the vaccine from Biden’s administration led to the pharmaceutical company’s executives making billions and Pfizer’s stock rose dramatically showing the real driving force behind the promotion of these “solutions” has never truly been about helping anyone with their actual problems.

“Maybe at this point, we should acknowledge that drugs are not the answer to every human problem. People are more than just a collection of chemicals that could be manipulated to produce a desired result. They’re human beings. They have souls. If they’re sad or sick or alienated from other people,” Carlson concluded, “it’s just possible that Pfizer is not the solution.”