Britney Spears’ path of self-expression after her conservatorship ended had crossed the line to a call for help for some fans of the pop star, but while criticism from strangers may be readily dismissed, she was far from silent about her questionable behavior after her ex-husband suggested she was causing emotional harm to their teenage boys.

Kevin Federline was married to Spears from 2004 to 2006 and the couple had two sons together, Sean Preston, 16, and Jayden, 15. After reportedly not commenting on his ex-wife’s life for a decade, he spoke with the Daily Mail and his views left Spears reeling.

“Only one word: HURTFUL,” she posted on Instagram as part of her initial reaction to Federline’s interview. 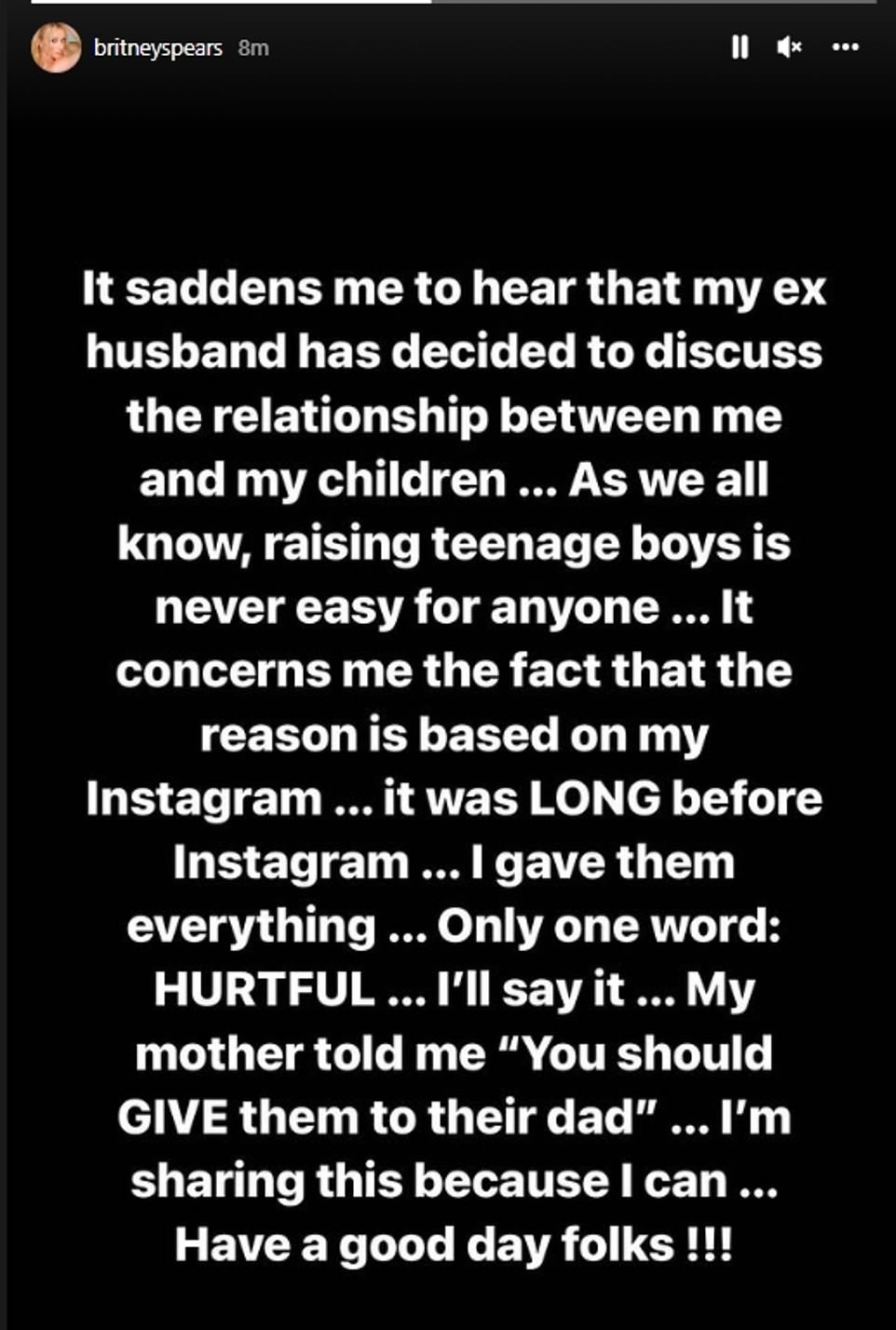 “It saddens me to hear that my ex-husband has decided to discuss the relationship between me and my children. As we all know, raising teenage boys is never easy for anyone. It concerns me the reason is based on my Instagram. It was LONG before Instagram,” she expressed.

When speaking with the Mail, Federline had said, “The boys have decided they are not seeing her right now. It’s been a few months since they’ve seen her. They made the decision not to go to her wedding.”

The 41-year-old spears had married 28-year-old Sam Asghari in June, and while Spears had shared a number of racy photos to social media while the couple honeymooned, her trend of topless and naked snapshots had been going on for some time leaving fans to believe the conservatorship that left her father as he legal guardian was justified.

Fans concerned when Britney Spears posts nude photos of herself that some see as a cry for help https://t.co/GQm1Jjgmi4

According to Federline, the sons have struggled with dealing with these public displays and he told the Mail that he has tried to tell them, “Look, maybe that’s just another way she tries to express herself.”

Regardless, he explained, “that doesn’t take away from the fact of what it does to them. It’s tough. I can’t imagine how it feels to be a teenager having to go to high school.”

“If there was a way–any way–I could possibly say something to just open [Britney’s] eyes–but haven’t found that yet,” he lamented. “I feel like, if I found that, I’d be on the phone trying to tell her.”

Spears defended her actions and her love for her sons in the initial post writing, “I gave them everything” before later adding, “I’ll say it…My mother told me ‘you should GIVE them to their dad’ … I’m sharing this because I can … Have a good day folks!!!”

But the pop star didn’t leave the matter there as she further vented that after 15 years of conservatorship here behavior was mild stating, “I should embark on doing WAAAY more than going topless on the beach,” and “Reminder that the trauma and insults that come with fame and this business not only affect me but my children as well.”

She also dared the Federline’s to “watch the BIG BOOTY VIDEO” noting, “Other artist have made much worse when their children were extremely young !!!!” 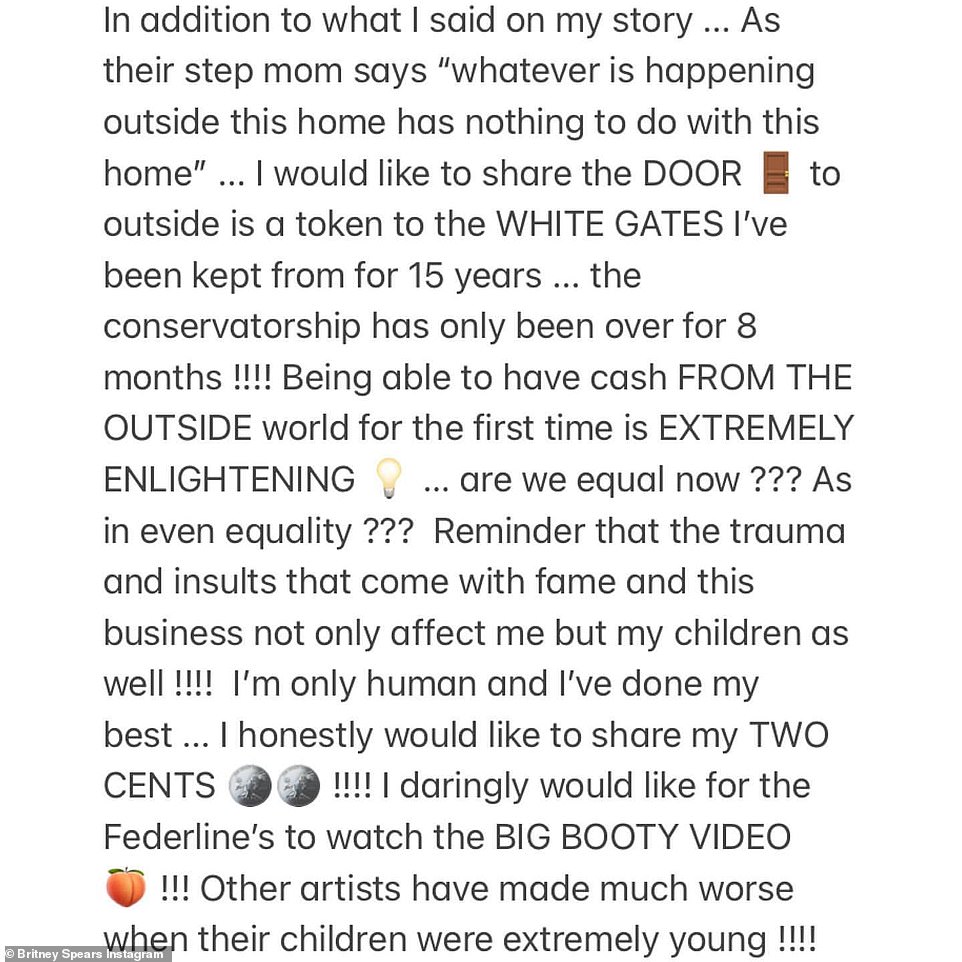 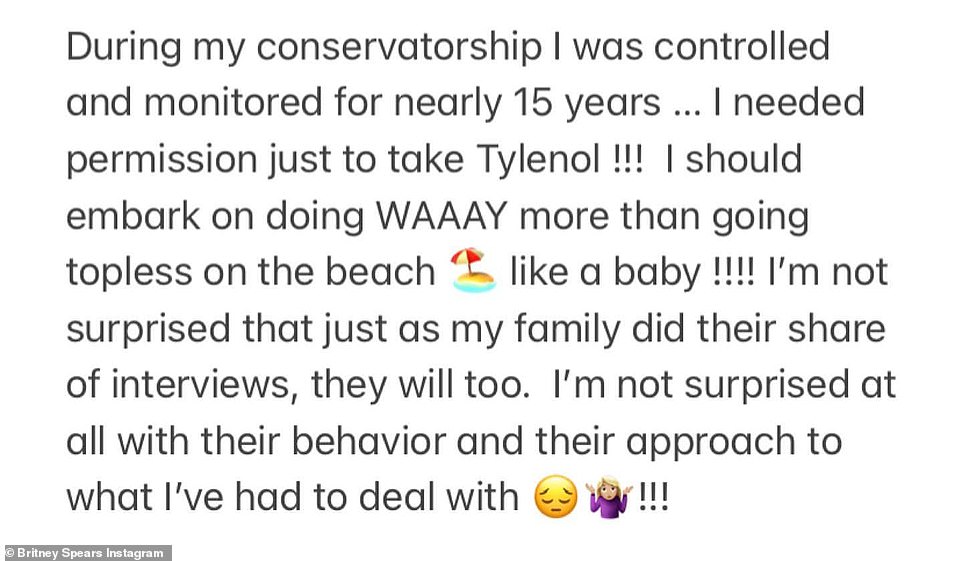 Asghari joined in defending his wife’s actions and wrote to his own Instagram page, “To clarify my wife has never posted a nude selfie except of her butt wich is quite modest these days. All other posts were implied nudity wich can be seen in any ad for lotion or soap.”

He went on to say, “There is no validity to [Federline’s] statement regarding the kids distancing themselves and it is irresponsible to make that statement publicly,” before suggesting Federline’s remarks were out of frustration that his “gravy train” would end after the boys turned 18 and alimony ceased. 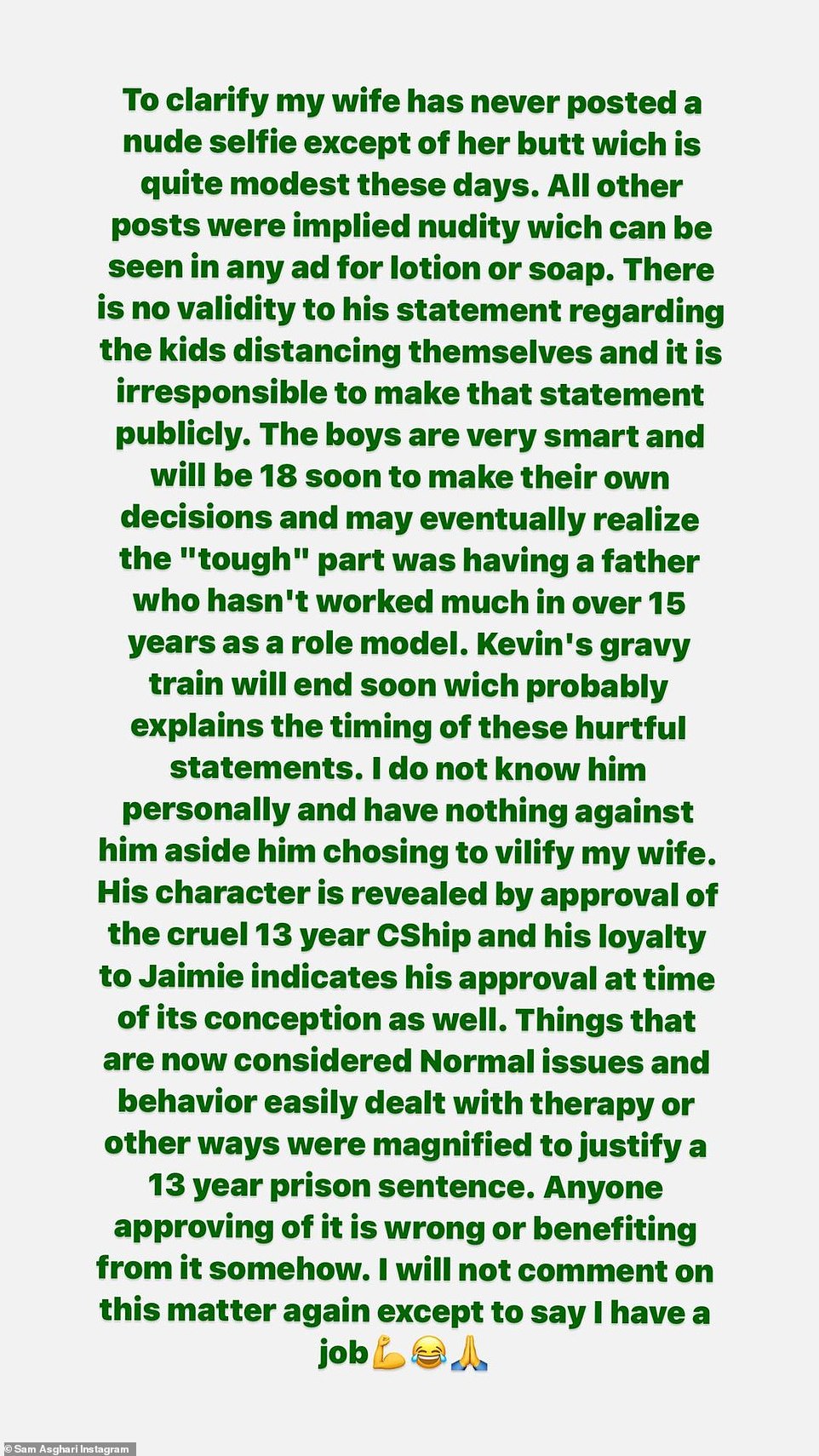 In one last shot against Federline, Asghari appeared to invoke Will Smith’s behavior at the 94th Academy Awards and while wishing his wife’s ex-husband the best suggested, “Keep my wife’s name….out your mouth.”