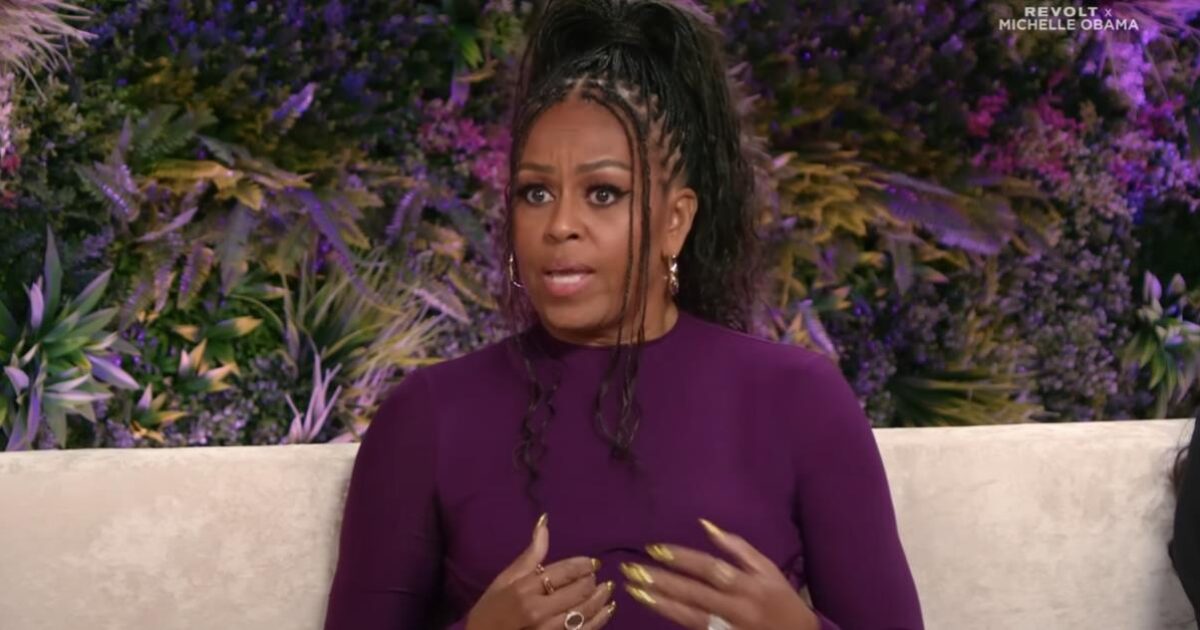 Former first lady Michelle Obama made a number of unusual admissions during a recent panel discussion, including that she sometimes hated her husband while their kids were young.

She also admitted to having viewed her children as “terrorists” and to having forced them to befriend someone at school just because of the other person’s race.

The discussion on Revolt TV was recorded in mid-December.

At one point, Obama addressed her marriage.

“People think I’m being catty for saying this. It’s like there were 10 years where I couldn’t stand my husband. And guess when it happened? When those kids were little. For 10 years, while we’re trying to build our careers and worrying about school and who was doing what and what, I was like, ‘Argh, this isn’t even,'” she said.

Obama later moved on to talking specifically about her children.

“Little kids, they’re terrorists. They have demands. They don’t talk. They’re poor communicators. They cry all the time. They’re irrational. They’re needy. And you love them. And so you can’t blame them, right? So you turn that ire on each other,” she said.

The former first lady then admitted how she’d once forced her then-young daughters to befriend a specific person at school just because the person was black.

“The first friend I made was a black mom. We were in a predominantly white school and I was like Sasha you and Olivia are going to be friends because she’s a black girl. And they didn’t even like each other. I was like I want to get to know her mother because I wanted the black mom experience,” she said.

It’s not clear what the “black mom experience” is. What’s known is that Obama and her husband are obsessed with race and have for years been complaining about the allegedly disparate treatment they receive because of theirs.

Michelle Obama explains being ignored by ‘white America’ when incognito as ‘just a black woman’ https://t.co/lATPLTFggw

Indeed, to hear them tell it, they’ve been treated like garbage just because they’re black and America is a racist country. Never mind that Obama’s husband, former President Barack Hussein Obama, won a presidential election twice.

The most recent race-related controversy involving the Obamas erupted in November when a noose was found near where the Obama Presidential Center is being built in Chicago.

“Construction has been suspended at the Obama Presidential Center after a noose was found at the site on Chicago’s South Side, the builders said Thursday, condemning what they called an ‘act of hate,’” NBC News reported at the time.

But speaking on Fox News’s “Tucker Carlson Tonight” after the noose was found, eponymous host Tucker Carlson cited what happened with disgraced NASCAR driver Bubba Wallace in 2020 to raise questions about the legitimacy of this alleged hate crime.

“Have you heard a story like this before? Well, it wasn’t that long ago in the middle of a national crime wave, which it has done very little to solve, the FBI rushed a team of agents to a NASCAR garage after a character called Bubba Wallace suggested that a noose had been left in that garage. Turns out the noose was a garage door pull,” he said.

“Here’s the interesting thing: Everyone makes mistakes, but mistakes like this never get corrected. Nobody ever apologized for that — not the media, not the FBI, and certainly not Bubba Wallace. In fact, Bubba Wallace said that only stupid people would doubt his story even after it was proven to be false,” Carlson continued.

He added that while Wallace didn’t necessarily make up the story, his assumption that somebody had maliciously left a noose for him was clearly wrong.

Likewise, Carlson said, the assumption that the noose found at Obama’s “temple” was left there purposefully as a slight might also very well be wrong.

“A lot of these stories are,” he noted.

“Why do they keep appearing? We’ll tell you why — because accusations of hate crimes and bias more generally, are tools that the people in power use, not the powerless, the powerful, to ward themselves greater and totally unearned moral authority over everybody else,” he continued.

Incidentally, former President Obama is a perfect example of this phenomenon, according to Carlson.

“Obama is a half-white guy with an Ivy League degree and served as president of the United States for two terms and lives in two oceanfront compounds in the richest zip codes in the world. Does that sound like oppression? No, it sounds like privilege. That’s fine, but no, they tell you he’s Emmett Till,” the Fox News host explained.

“He’s a powerless victim of your racism. So, when you make allegations like that, nobody gets to ask the obvious questions like, where did you get all this money? Like, how are you making a living? How did you get so rich? What have you been selling in exchange for that money and by the way, why are you spending a half a billion dollars on a presidential library?” he continued.

“Michelle Obama just wrote a whole book about her struggle to ‘stay visible in a world that doesn’t necessarily see a tall, Black woman.’ What? You don’t see Michelle Obama? She was the president’s wife for eight years. How much money has Michelle Obama made in the last six years? Oh, you’d love to know, but you’re supposed to just accept it uncritically, just like you’re supposed to believe the Jussie Smollett hoax,” Carlson said.