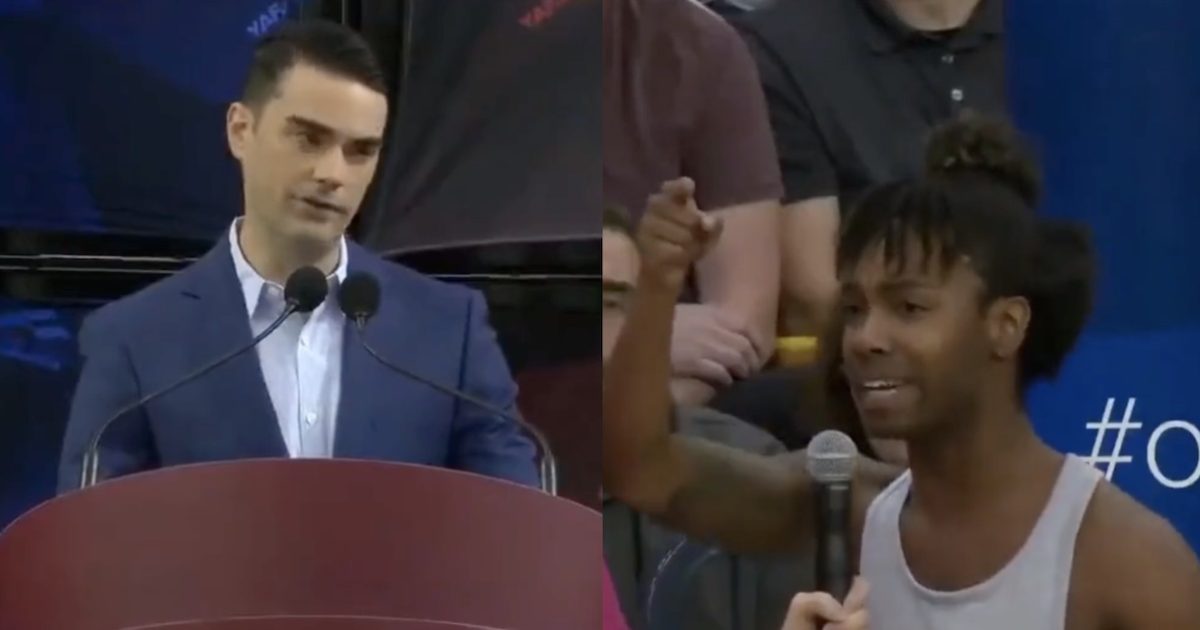 It is an unfortunate reality that college campuses across the nation are now widely considered bastions of Marxist thought that silence open debate by ignoring facts and deploying character assassinations against guests like Ben Shapiro who, visiting the University of North Carolina-Greensboro (UNCG), was met by one young man who resorted to vulgar insults about the conservative commentator’s sex life.

Shapiro, The Daily Wire’s Editor Emeritus was speaking at UNCG Monday by invitation from Young America’s Foundation for the Fred and Lynda Allen Lecture Series. Discussing the topics of biological sex and gender identity, Shapiro stated, “This Cartesian idea that you can be a woman in a man’s body because your gender is separate from your sex is, again, not supportable at any level.”

During the question and answer portion of the lecture, a young man who introduced himself as Quentin Merritt prefaced his comments by touting his credentials, “I just won the most prestigious award in the country to pursue research at any institution I want, the National Science Foundation Graduate Research Fellowship.”

“So,” he went on, “I think I’m pretty qualified to say that most of what you’re saying is based on, like, old data…For example gender identity disorder, that’s a DSM-4, bro. We use the DSM-5 now for psychologists,” referring to the 2013 Diagnostic and Statistical Manual of Mental Disorders, Fifth Edition.

I’m not surprised that this “mathematician and physicist” who was just humiliated by @benshapiro won a prestigious award. That’s exactly the problem.

My gosh, what a moron. pic.twitter.com/2XFdPC1Ffg

Shapiro promptly corrected the young man as he had, in fact, used the DSM-5 and the accepted language of “gender dysphoria” throughout the lecture. Any attempt at constructive dialogue died at that moment when Merritt had his entire argument dismantled with a sentence and so he resorted to mockery, saying in part, “You sound like a bozo bro, and you get no p*ssy and you can’t even make your wife wet, bro, so what’s good?”

Unflustered by the childish turn in the back-and-forth, Shapiro called out the juvenile retort for what it was, “The nice thing about having several small children is that I don’t feel the necessity to have my masculinity challenged by someone like you.”

Merritt attempted to salvage his failed ambush of Shapiro by touting his credentials again while resorting to critical race theory-styled slams against America and binary biological realities as constructs of racist culture.

The North State Journal pointed out that the “most prestigious award” Merritt had mentioned earlier amounts to an annual stipend of $34,000 for three years with a $12,000 “cost of education allowance” paid to the institution over its five-year span.

Shapiro brought up the award to tear into the poor logic Merritt had displayed.

Though he clearly didn’t need the support, many on the internet were more than happy to point out the pathetic display from Merritt.

Matt Walsh, Shapiro’s colleague from The Daily Wire tweeted, “Literally nothing that the college student says in this exchange is true or even coherent.”

Literally nothing that the college student says in this exchange is true or even coherent. Any attempt to defend gender ideology always descends immediately into nonsense and ad hominem. Exhibit 213,398,003:pic.twitter.com/KCE0bjkWyM

“Any attempt to defend gender ideology always descends immediately into nonsense and ad hominem,” he went on and joked, “Exhibit 213,398,003.”

If this is the quality of student/graduates being produced by the higher education system in America, we’re doomed.

What is his GPA? I’m guessing not so great if he didn’t mention it as his credentials.

@benshapiro has a ton of patience. Anybody else feel like college students have all turned into the guests they used to have on Jerry Springer? You feel bad for them but are so entertained that you can’t help but egg them on.

But he’s a physicist, mathematician and an award winner. pic.twitter.com/xfueV43iQ3