A federal judge ordered the Biden administration Wednesday to fully implement Title 42 for the next 14 days, the latest setback in the administration’s efforts to end the public health policy.

Louisiana Judge Robert R. Summerhays issued the order in Arizona’s case against the Centers for Disease Control and Prevention’s (CDC) decision to end Title 42, which is used to quickly expel certain migrants during the pandemic. The order requires the Department of Homeland Security (DHS) to continue enforcing the policy, and prevents the agency from implementing the CDC’s order to terminate the program.

“It is hereby ordered that for the next 14 days, unless this Court acts to extend or shorten that period: Defendants, including DHS and all of its subdivisions, agencies, and employees, are hereby enjoined and restrained from implementing the Termination Order, including increases (over pre-Termination Order levels) in processing of migrants from Northern Triangle countries through Title 8 proceedings rather than under the Title 42 Orders, and are further enjoined and restrained from reducing processing of migrants pursuant to Title 42,” the order stated.

The defendants, including DHS, asked on April 21 for a Temporary Restraining Order and Summerhays indicated Monday that he would grant it if the two sides met and agreed on joint terms. 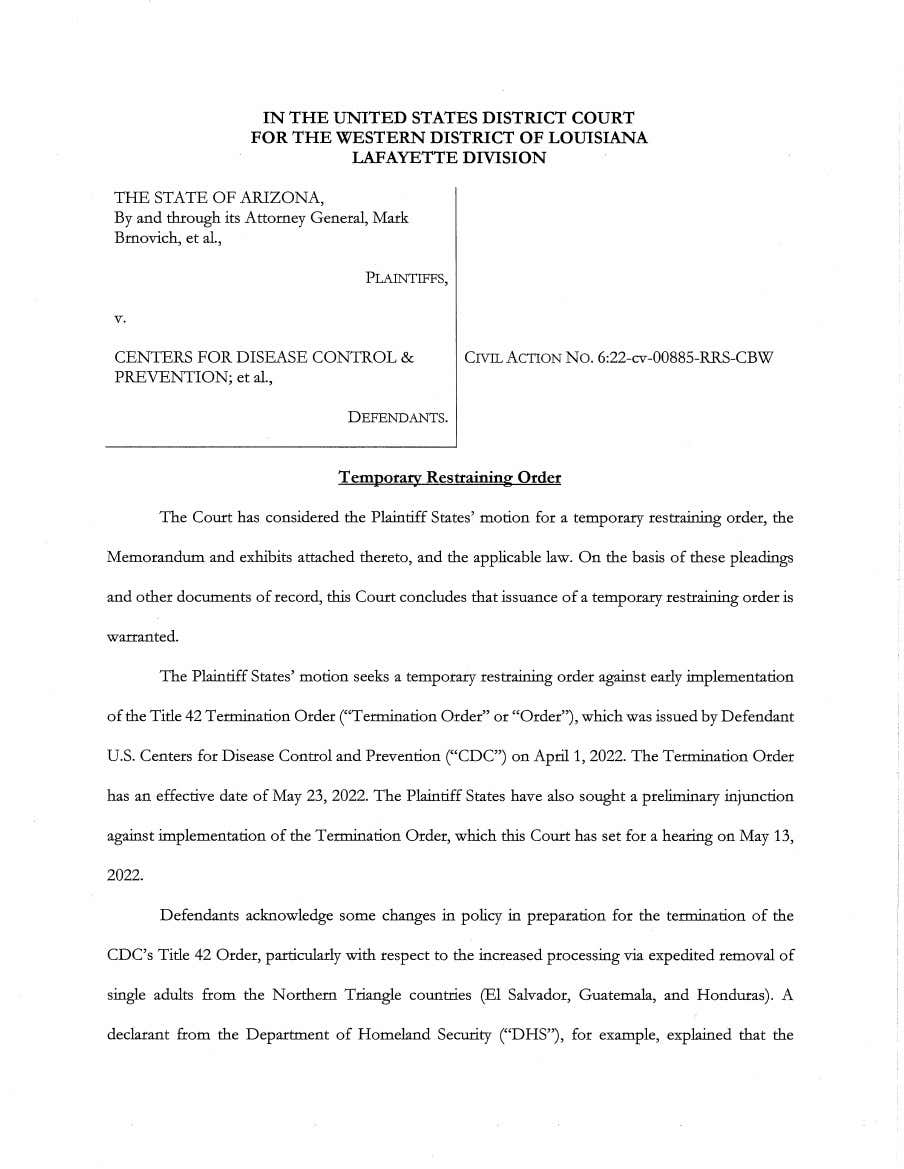 Summerhays pointed out that DHS had already admitted to scaling back  its enforcement of Title 42.

“Defendants acknowledge some changes in policy in preparation for the termination of the CDC’s Title 42 Order, particularly with respect to the increased processing via expedited removal of single adults from the Northern Triangle countries (El Salvador, Guatemala, and Honduras),” Summerhays wrote.

“A declarant from the Department of Homeland Security (“DHS”), for example, explained that the agency ‘has begun in recent weeks to increase the use of expedited removal for some single adults eligible for removal who would otherwise be expelled pursuant to Title 42. Similarly, Defendants’ brief in opposition acknowledges,’ DHS’s recent increased use of expedited removal for noncitizens from the Northern Triangle countries is in preparation for the full resumption of Title 8 immigration processing,” he added.