A virtual hearing for a Michigan district court grew heated recently as a plaintiff, suing a man for $10,000 after he stood her up on a date, turned her aggression on the judge in a shouting match.

The Honorable Judge Herman Marable Jr. had his patience severely tried as he heard QaShontae Short of Flint, Mich. make her case against Richard Jordan who was accused of “intentional infliction of emotional distress.” The suit, dating back to 2020 according to TMZ, explained that Jordan “did not show and left on [Short’s] mother’s birthday and [her] mom had just passed away.”

Jordan himself didn’t do much talking after the judge asked if he would be representing himself to which he replied, “To be honest with you sir, I thought this was just gonna be thrown out. We had a date, one date, and nothing else after that, and now I’m being sued for $10,000…I think this is a waste of your time.”

The plaintiff was more than happy to make up for the defendant’s limited comments as she laid allegations of perjury against Jordan while seeming to be walking through an airport. Marable explained after already confirming that the charges were for emotional distress, “You can’t add another count because you don’t like or disagree with what is in his answer!”

“If he responds and his response is a lie, it’s perjury,” she argued, “then my documents will prove that he lied in his response.”

“Yes, I understand perjury is a lie. I know what perjury means!” she claimed as Marable corrected her, “No, you don’t. Perjury is a statement, a false statement made under oath.” 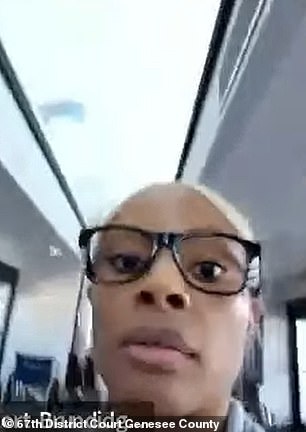 “Exactly,” Short went on, shouting over the judge as he tried to add clarity, “and I have a document that proves he was lying!”

As she went on, Marable slammed his arm down on his desk in frustration and reiterated the specific point, “Under oath! It’s a false statement made under oath.”

“Bottom line is you said it’s a criminal offense,” Short stated, putting words in the judge’s mouth, “so I will send it to circuit court. Are we done here?” she demanded.

As he continued to attempt to define perjury to her, she repeatedly shouted “Are we done here?” over the judge to which he ultimately said, “No we’re not!”

Short then accused him of belittling her as she repeatedly shouted, “Do not insult my intelligence.”

Perhaps her history of frivolous lawsuits gave Short the impression that she had gained some sort of legal expertise. As the Daily Mail reported, the same year that she initially filed her suit against Jordan, she had also gone after the Flint Police Department for $300 million as well as AT&T for unspecified reasons. Both cases were dismissed.

“Ma’am, listen, I’m not gonna sit here and go back and forth with you, I’m gonna repeat what I said. You need to be quiet while I’m talking. Can you mute her?” the judge finally asked of an unseen party in the room. “She’s gotta be muted.”

Finally having the chance to speak uninterrupted, he explained, “I am ordering that this go to seventh circuit court. Venue is to be changed because intentional infliction of emotional distress is a circuit court matter outside the jurisdiction of district court.”

Short was given a charge to pay the filing fees of the receiving court within 56 days or have her case dismissed.