A new analysis of President Biden’s “Build Back Better” social and climate spending plan finds that some middle-income families will indeed pay more in taxes, despite his promise not to raise tax rates on those earners.

Biden and his surrogates have repeatedly claimed that the $1.85 trillion spending bill only raises taxes on those earning $400,000 or more, but according to the non-partisan Tax Policy Center, about 30 percent of middle-income earners will see some higher tax rates.

“Taking into account all major tax provisions, roughly 20 percent to 30 percent of middle-income households would pay more in taxes in 2022. However, their tax increases would be very small,” the center’s analysis noted.

In addition, the think tank noted that the tax rates for Americans would change again in 2023 under Biden’s bill, which only expands Child Tax Credits through the end of next year.

The center noted that the “effects of these changes would result in many households paying higher taxes in 2023 than in 2022.” 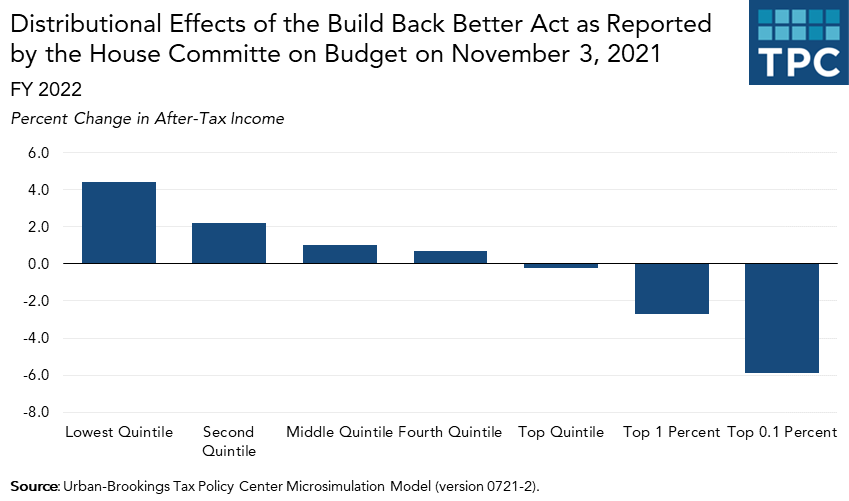 The two highest levels of earners would see their overall income fall by roughly 2.5 to 6 percent; on the other end, the lowest-earning Americans would see a rising income of about 2 to 4 percent.

But any rise in taxes for middle-income earners goes against the president’s repeated promises to those families that his plan would not raise their taxes at all, leaving many to doubt his veracity regarding the other elements of his bill.

“Best of all, the cost of these bills, in terms of adding to the deficit, is zero. Zero. Zero. And I made a commitment when I wrote these when I was running: No one making under $400,000 a year will see a penny in their taxes go up,” Biden said during a speech in Michigan in early October.

There is also a gift in the measure for the highest earners, many of whom are concentrated in blue states along both coasts: The bill contains a provision allowing a higher deduction limit on SALT (state and local taxes), which will greatly benefit wealthy earners in those high-tax states. President Donald Trump’s 2017 tax reform bill rolled back those deductions.

However, the SALT rollback “would provide almost no benefit for middle-income households,” the Tax Policy Center said.

Currently, the Congressional Budget Office is scoring the measure to calculate its true costs. A vote on the bill is expected later this month, and while it is likely to pass in the House, it faces a significant hurdle in the Senate.

Democrat Joe Manchin of West Virginia has repeatedly voiced opposition to the measure’s price tag and its shunning of fossil fuels like natural gas and coal, both of which are major industries in his state. He has also said he does not want to support additional massive federal spending he believes will worsen already rising inflation.