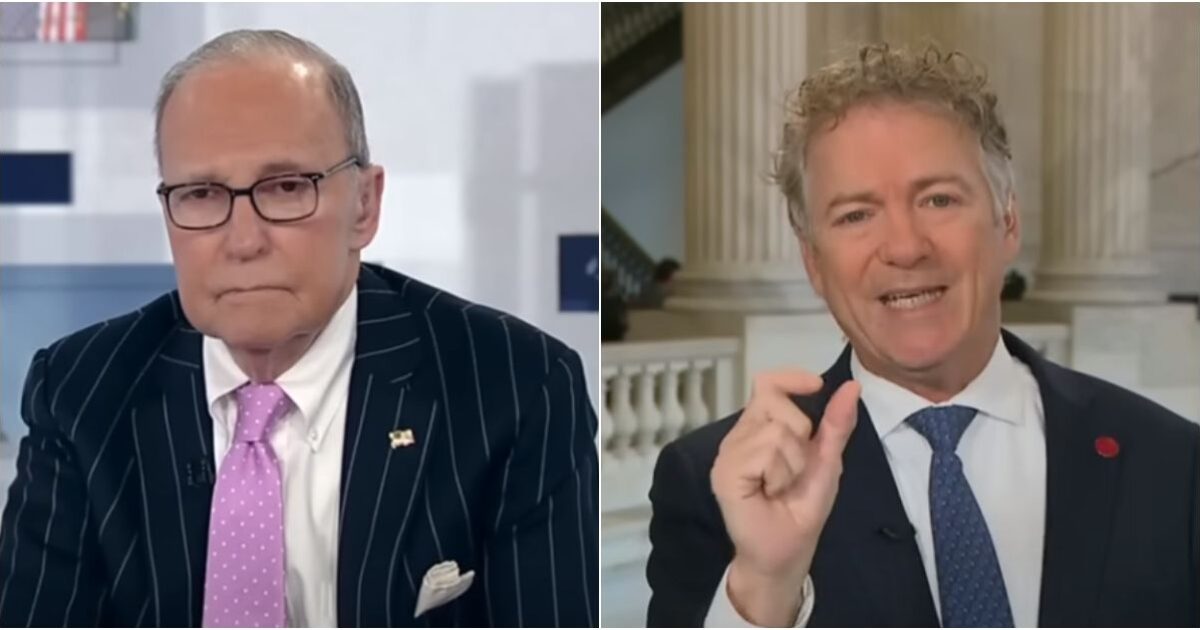 Sen. Rand Paul (R-Ky.) basically told Republicans that they lack a set, stating that they “emasculated” themselves by ceding power to Democratic overspending in the new omnibus bill and urged them to take it back by opposing it.

Paul told his colleagues in the GOP to take a stand and prove they are fiscally conservative in an appearance on Fox Business host Larry Kudlow’s show on Wednesday. That was after he told them to grow a set.

“But the other thing is, 41 votes would stop the big spending. If 41 [Senate Republicans] said no and held our ground until there was a compromise, we could force Democrats to reduce spending,” he asserted. “We have completely and totally abdicated the power of the purse. Republicans are emasculated. They have no power, and they are unwilling to gain that power back.”

Then he told Republicans exactly how they could regain power if they have the spine to do so.

“The only way they can get [that power back]: Divide the spending into 12 bills and then decide to hold one of them hostage or two of them hostage. And then apply policy changes in the House,” he advised. “But they’ve got to do it. They’ve got to capture this, and we’d have to do the budget the way it’s supposed to be. Budget — 12 appropriation bills, then try to attach some policy like removing the 87,000 IRS agents from the IRS budget.”

“When we try to do it in one bill, Republicans don’t have the intestinal fortitude. They always collapse, and they fear shutting government down, so no policy objectives ever get added,” Paul charged.

Appropriations negotiators Sens. Patrick Leahy (D-VT) and Richard Shelby (R-AL) and Rep. Rosa DeLauro (D-CT) announced the creation of a framework for an omnibus spending deal on Tuesday, something that fiscal conservatives are staunchly against.

Paul was joined by the “Breakfast Club,” a group of Republican senators led by Sen. Ron Johnson (R-WI). The group is in opposition to the plan. Other members include Republican Senators Mike Lee (UT), Lindsey Graham (SC), Rick Scott (FL), Ted Cruz (TX), and Mike Braun (IN), according to NBC News.

Johnson led a conference meeting on Wednesday in an effort to persuade fellow Republicans to practice fiscal conservatism and delay the major spending bill until the next Congress is sworn in. At that point, Republicans will control the purse strings via the House of Representatives.

.@SenRonJohnson has a hand-out for reporters after the “Breakfast Club” meeting. pic.twitter.com/AHOV3fGDtd

The confab comes as Senate Minority Leader Mitch McConnell (R-KY) said he is supporting the framework of the omnibus appropriations deal Wednesday to fund the government through most of 2023, the first step in a scramble to prevent a government shutdown. McConnell always seems to ally with the Democrats when it comes to spending bills and the lack of a federal budget.

Johnson and other fiscal conservatives were disappointed as the House passed a one-week continuing resolution according to Government Executive. But they haven’t given up and are still fighting the massive spending pushed by the left and now enabled by the right.

“Lawmakers are seeking to buy time until appropriators can draft and Congress can pass a full-year omnibus funding measure for fiscal 2023 after negotiators struck a bipartisan deal on a framework Tuesday evening. Absent congressional action, funding would expire and agencies would shutter late Friday. The House-backed bill would extend that deadline to Dec. 23,” the government watchdog reported.

“The measure now heads to the Senate, where it will require a unanimous agreement to provide for expedited consideration. Several senators said Wednesday they objected to the CR and were considering voicing that from the Senate floor, which would effectively cause a short shutdown,” it added.