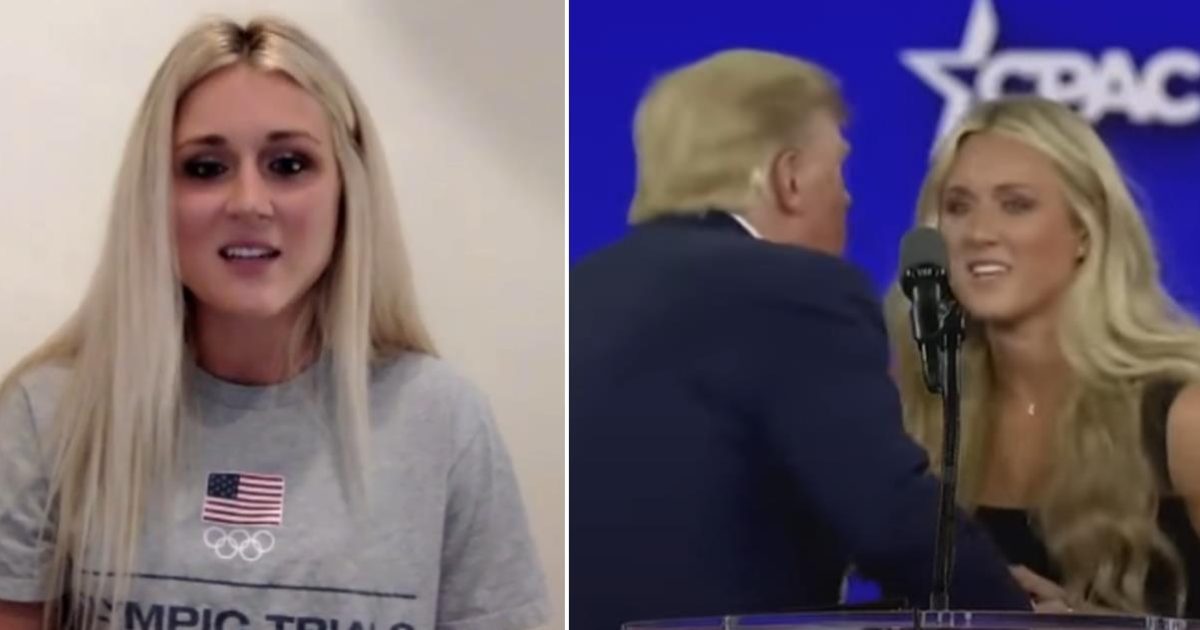 Riley Gaines, a college swimmer who went viral after the media claimed she’d rejected an attempted kiss from former President Donald Trump, is now speaking out about the media’s “propaganda.”

Speaking with Fox News, she completely refuted the allegation that had erupted across the media following her appearance last weekend at the Conservative Political Action Conference Texas (CPAC Texas).

“I think these recent headlines show, you know, how the media is pushing propaganda to fit their narrative. By no means — not even for a second on that stage — was I uncomfortable sharing that space with Trump. I was nervous about being in front of that many people, but I never thought that Trump was making me uncomfortable,” she said.

“I was never repulsed by him. And so, you know, you have these headlines that say ‘swimmer awkwardly refused Trump’s kiss.’ I slightly turned my head to hear what he was saying to me. So people took that and completely ran with it.”

As to why the media ran with a false narrative about her and the former president, Gaines speculated that maybe they were trying to excuse current President Joe Biden’s habit of actually kissing young girls.

“And I don’t know if it’s trying to just justify Biden doing that to younger kids. You know, you’ve seen videos of that thing happening. And so I’m not sure if they’re trying to paint the same narrative or what it is. But take it from me, I never felt uncomfortable there. And I was never ever trying to dodge a kiss. I think that’s completely crazy,” she said.

As previously reported, Trump called Gaines to the stage while he was speaking at CPAC Texas last weekend. As she arrived at the podium, the former president leaned in toward her right ear, prompting her to turn her head slightly to the left. The media interpreted this as Gaines rejecting an attempted kiss from him.

After taking the stage, Gaines delivered brief remarks in which she defended women’s sports from intrusion by so-called “transgender women.”

“Basically, all I want to say is that it takes a brain and common sense and fifth-grade biology level understanding to realize that this is blatantly unfair. It’s completely obvious. I’m just gonna say, keep female sports female!” she said.

Continuing her remarks to Fox News, Gaines expressed deep gratitude for having been allowed to speak to the world last weekend.

“So obviously, Trump is someone with tremendous power. And to be recognized by someone who is in that position where he does have all that power and he has great sway on things that matter, to kind of give me that stage, that voice, it’s extremely honoring, because it’s acknowledgment that this is a big deal, and that it’s wrong. And that’s more than what we’ve gotten so far,” she said.

“I had no idea that was going to happen. It was completely unexpected to me. I met with Trump before the speech, and we took a photo, and we chatted for a while. And he told me, ‘I have you a front-row seat. I might mention your name. You can just stand up. It’ll be cool.’ And so I had no idea I was going to go on stage. So I was pretty nervous. But when it’s a topic you’re so passionate about, nerves do kind of go out of the window a little bit.”

Note what she said about receiving no “acknowledgment” until Trump. To politicians like current President Joe Biden, a rabid Democrat, people like Gaines don’t exist. It seems the only people who do matter to the likes of Biden are “transgender women.”

In fact, the current president’s administration is trying desperately to engineer it so that young students like Gaines have no opportunity to voice their dissent.

Concluding her remarks to Fox News, Gaines slammed the media for the lies and distortions they tell in their quest to uphold liberal narratives.

“I think the media paints a picture that if you speak out, you’ll be totally canceled and things like that. But since I’ve spoken out, I’ve had so much support from all across the world. And I’ve received very minimal backlash, which kind of tells me that this is a topic that the majority of people side with me on because it is something that seems so common-sense,” she said.

“And so I’ve been extremely eye-opened these past couple months just about how the media works in general and things like that. You know, there’s articles that come out that label me as ‘anti-trans swimmer.’ But by no means is that the reality of it. I’m not anti-trans. I’m pro-woman.”

True, but to the establishment press, which critics say functions as the propaganda wing of the Democrat Party, there’s no difference between being anti-trans and pro-woman.